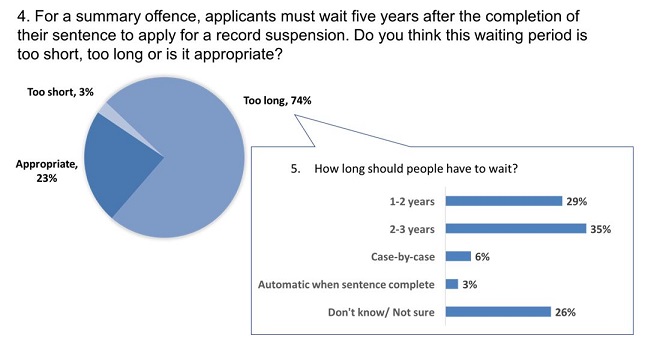 How Long is the Average Waiting Period for a Record Suspension?

Getting a record suspension in Canada is a relatively complex process that is best done with the help of an experienced professional. The first thing you need to know about successfully obtaining a record suspension is that it won’t happen overnight. Even when you’ve got someone who knows the ins and outs of the process on your side, there is still a waiting period to go through for all applications.

Think of a record suspension like a second chance – but with certain conditions. Everyone makes mistakes, and in all but the most extreme cases, mistakes shouldn’t become a permanent obstacle to living a normal life. That’s why record suspensions exist. While they provide an opportunity for those convicted of crimes to put their past behind them and move on with their lives, they are not handed out easily or swiftly.

So how much time will one have to wait for a record suspension, exactly? The simple answer is: it varies. There are a couple of key aspects that will determine the delay.

5 months for charges that have been withdrawn, dismissed, or acquitted.

1 year for absolute charges, stayed charges, or any given peace bond.

3 years for a conditional discharge.

5 years for a summary conviction.

It’s important to remember that “time served” doesn’t just cover the actual time spent in jail, but also any fines associated with the sentence. These need to be paid in order for the sentence to be considered served. Furthermore, if there is a probationary period required after the sentence, it must also be completed.

Once all the requirements of the sentence have been met, the first step to obtaining a record suspension is considered complete.

Nature of the Crime

Generally speaking, there are two types of offences in Canadian criminal law – summary and indictable. A record suspension can be sought for either type, but indictable offences carry a longer waiting period than summary offences.

Summary offences are considered less serious, and in most cases don’t require a jury present in order to have the case concluded in court. These types of crimes include things soliciting prostitution, common assault, theft under $5000 and criminal harassment.

Summary offences also involve lower fines and shorter sentences – if jail time is required at all.

Indictable offences are more serious crimes and require a jury for the decision. These types of crimes include things like theft over $5000, fraud over $5000, drug trafficking and assault with a weapon.

Unsurprisingly, jail sentences and fines are much stiffer for indictable offences.

In the past, the waiting period to apply for a record suspension was three years after the completion of the sentence for a summary criminal offence, and five years for an indictable offence.

Of course, this is assuming that everything goes smoothly from application submission to end result. Any new arrest and criminal charge, for example, will result in further delay – effectively entailing a complete re-start of the process.  Furthermore, a record suspension may be denied if you are charged with a criminal offence during the application process, even if the charge is later withdrawn, dismissed, stayed, or discharged.